The Curiously Strong Peppermints – Echoes From The Ultraviolet Fuzz [2011] [Album]

The Curiously Strong Peppermints return with the release of their second album, ECHOES FROM THE ULTRAVIOLET FUZZ. Although it picks up right where their debut album left off, it is more cohesive, band-oriented and features a wider sonic range than their debut, Endless Fields of Poppy. ECHOES is a concept album organized into three Acts and examines: the rise and fall of Anna Livia Plurabelle and The Inverted Why; the couple's disillusionment at the hands of The Synthetic Grin; The Inverted Why's isolation and his eventual redemption in The Ultraviolet Fuzz. The album is full of hooky melodies, abstract lyrics, oddball instrumentation and of course lots of noisy guitars. The Curiously Strong Peppermints are currently performing live in the Midwest to support the album.

Couple very fine tunes on here, especially " Fourteen Ways To Beat The System". Thanks for sharing 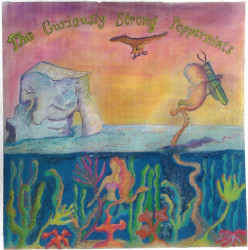