Album info
The Curiously Strong Peppermints are a Minneapolis-based psychedelic acid-pop quintet. Their bio claims they sound like “Elliott Smith backed by The Flaming Lips playing The Beatles backwards,” but that was written under suspicious circumstances involving a ferret, two buckets and a typewriter. What else is ‘known’ about the band may not be true: demos recorded from inside a box, using shoehorns and eggbeaters; concept albums about Lady Gaga’s left testicle; pianos drenched in gallons of peach yogurt. Are there actually seventeen members of the band, but twelve of them play nothing and simply perform pantomime at their homes while the remaining five perform/record the music at a gig or studio?

What IS known is that their debut album “Endless Fields of Poppy” was self-released in the imaginary internet realm, with a physical release on the mysterious Sunshine Cortex Records. The album was apparently 6 years in the making, recorded by the band in living rooms, garages, basements and bedrooms. A mix of melodic pop, layers of reverbed sketchy vocals, fuzzy basses and backwards drums. Plus a plethora of instruments such as air organs, glockenspiels, theremins, toy pianos and a Hawaiian tremoloa. This is headphones music, people. If your ears could smile… well… you should really see a specialist for that. 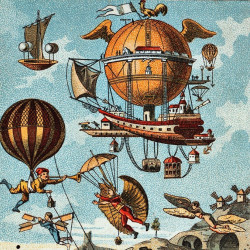 Payment
Are you the creator of this album? Enable payments
Artist
The Curiously Strong Peppermints
Tags
psychedelic
Release Votes
0 votes