The song Belly of the Beast was written by Carl after attending the Occupy Wall Street protests at Times Square on 10/15/11 with Blake and Mecca Lecca Recording Company founder Jonny Leather.

After the protests, a General Assembly was held at Washington Square park where Professor Gayatri Spivak of Columbia University gave a speech stressing the importance of political action by Occupy Wall Street demonstrators because they are in "the belly of the beast." 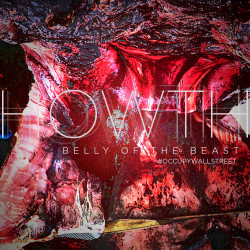