Artist info
We were both leaving the worst behind, mistakes we had made that followed us into the dusty corners of our old rooms. Leaving behind those we spoke of love to, but felt none for anymore. We were leaving behind days of feeling like aliens in our own homes. He moved in the basement, I lived upstairs. We felt fresh, wide eyed, and ready for the world we had been scared to embrace. But the day was too bright, and the faces were too mean, and the city felt no different. We felt no different. So, we hid in the basement where the light barely cracked through the grates like a prison. But we had chosen this prison and we needed it. Our legs wouldn’t let us crawl upstairs or out the door. We didn’t give a fuck what anyone would think, but with that our eyes were no longer wide. They had adjusted to the dim light of a flickering light bulb and the red lights of guitar pedals. I was lonely and still had my demons, he was lonelier and just waiting for something bad to happen. Survival mode. He had to move back home to Minnesota to take care of his dying father. He was almost too late. I moved to nature and felt wide eyed again. Our friend burned down the old place while he slept. He barely walked out alive. I went back with him to gather stringless guitars covered in fire extinguisher fluid, tapes that had blackened, and ash covered drums. Nothing worked, but I didn’t care anymore. We finished what we had to. Here it is.
Howth 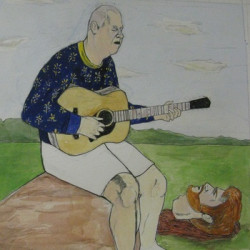