Artist info
Richard the Lionhearted is a six-piece Columbia, Missouri band that formed late in the summer of 2009. The band’s diverse lineup & various musical backgrounds work to create a textured and moody sound with well-composed instrumental and vocal harmonies that mold into a style of rock and roll yet to be pioneered.

The band self-released their debut album December 17, 2010. The self-titled release was recorded and produced by Evan Meeks at Rosewood Music in Jefferson City, Missouri.
Richard the Lionhearted 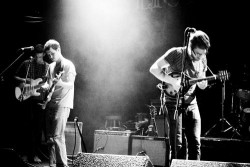