knertz.de wrote:
fnessnej is an instrumental quintet from darmstadt and mainz. This much is certain – or is it? I did hear some voice in one song. Or wait ? that might have been some weird instrument. Maybe sampled vocals? Below the line: elaborating fnessnej musical „elements“ turns out to be a problem. What’s left to say is: i see a stage full of gadgetry, little instruments hardly to define. Anyhow also two guitars, a bass, a drumset, several synthesizers - and no legroom. This much is certain.
In the current instrumentation, fnessnej is on the air since approximately 1968. In the course of time, the band clearly distanced itself from a playful, slightly electronic post-rock sound, dismembering a laptop and advancing to a new level of analog sound creation, experimenting on how to create a one-of-a-kind tonal cosmos. While stacking up on equipment in order to create this unique sound, fnessnej has become less of a quintet than an orchestra at this point. Anyhow, the band doesn’t commit itself to plain „tone-creation“ - more though to composition - fathoming the possibilities of instrumental music without ignoring structure and song itself. in-your-face songcollages, complex popsong-structures, loopbased experiments and disco-ish tunes – you’ll find them all. Musically, fnessnej has long emancipated from etiquettes such as "post-rock" and by now play a confident style throughout a broad stylistic diversity, which i again do not want to dimmish by defining an actually new style for his band (does this make sense?). then - as a last novelty, the band started to refuse the total refusal of vocal elements, conclusively eliminating any possibility of categorization. On stage, fnessnej are 5 giggly goofballs with red overalls and white motorbike helmets, sometimes hiding behind the world’s most stupid robot-annoucements in order to not open their own mouth, anyhow yelling the rare passages of vocals into no microphone at all, sometimes accompanied by fat old ohlson on mpc, trying to sing along and looking hot. Looking so hot. 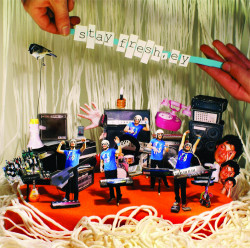