EP info
In early 2009, a group of friends got together and started writing music. Eventually, they decided to call it DEERPEOPLE. Over the following year, they refined the songs by playing house parties and small local venues in Stillwater, OK where the audience could be right on top of them. In addition to playing shows with Oklahoma’s own Evangelicals, Starlight Mints, Mayola, The Uglysuit, Sherree Chamberlain and Jesse Tabish (Other Lives), they were invited to headline the Opolis stage at the 3rd annual Norman Music Festival in Spring 2010. The DEERPEOPLE EP was recorded at Trent Bell Labs with Trent, who has engineered many stand out projects including last year’s re-imagining of The Dark Side of The Moon by The Flaming Lips. Upon completion, the EP was released independently. It can be downloaded for free at http://deerpeople.com.

If you like the EP, please consider buying it at bandcamp! 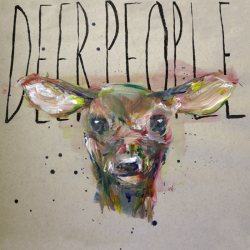