Artist info
Chris Zabriskie (born March 10, 1982 in Olympia, Washington) is an American composer and musician.
Chris Zabriskie got his musical start in a noise rock duo Struggleburger, but went solo unexpectedly at a show in 2001 when the other members of the band did not show up. His first solo album, The Black Hole, was released in 2006.
In 2007, Zabriskie recorded We Were Wrong under the name lo-fi is sci-fi with Marc Sirdoreus (better known as Marc with a C). The music video for the first single, "The Script You Wrote is Terrible," won praise for its simple presentation and Zabriskie's deadpan performance.[1][2][3]
Zabriskie released two albums under his own name in 2008, O Great Queen Electric, What Do You Have Waiting for Me? and This Silent Bloody Night. The song "Joss Whedon," from O Great Queen Electric, gained attention from the Joss Whedon fan community,[4] with Whedon himself commenting on the song's Amazon MP3 page.[5]
In 2009, he turned his attention towards instrumental music, first releasing The Dark Glow of the Mountains. The album's stark electronic minimalism[6] was a departure from his previous records. Two more instrumental albums, I Am a Man Who Will Fight for Your Honor and Preludes followed in the same year. In 2010, he released Vendaface, and he is said to be working on new instrumental music, including a film soundtrack, as well as new vocal material.[7]
Zabriskie self-releases his albums on his website, iTunes, and other online retailers, and is also a vocal supporter of BitTorrent and file sharing, and has said that he leaks his own records to various torrent sites in advance of their release dates.[8] As of March 2009, Zabriskie offers free downloads of all of his music on his website.[9]
Zabriskie is also a filmmaker, with producing and editing work including music videos for John Vanderslice,[10] as well as various short films and many of his own music videos.[11][12] In 2010, he released a feature film, Tretet, for free on his website, which consists of amateur footage of the 1939 New York World's Fair re-edited into what Zabriskie calls "a science-fiction film."
Chris Zabriskie 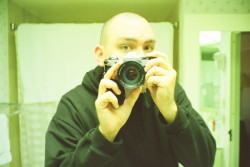