Artist info
The Jonny Monster Band is a power trio from New Paltz, NY who are known for their fast rock n’ roll driven blues sound. Featuring Jonny Monster on guitar and vocals, Roger LaRochelle on drums, and Pete Newman on bass, their original sound mixes classic old blues, hard rock, and acoustic roots blues. The release of their “self-titled” debut album in January of 2011,  and second full length album “Bad Times Before” in October of 2012 have marked them a staple in the blues scene of their area. As well as headlining their own shows up and down the East Coast; the band’s fresh take on rock n’ blues music has been heard opening for such greats as Johnny Winter, Jefferson Starship, Lucky Peterson, and Booker T. Jones. Jonny Monster’s high-energy aggressive guitar style captivates audiences and puts the band at the head of the future of rock n’ blues music as well as making them a must see live act.
The Jonny Monster Band 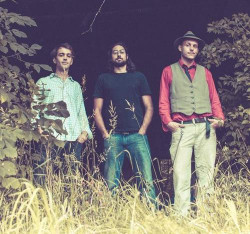