No releases found
Artist info
Harrison Zafrin was born in Brooklyn, New York and spent many of his formative years in the New York City suburb of New Rochelle. As a teen, Harrison loved hip-hop and rap. Drawing inspiration from artists including Eminem, Atmosphere, and many others, he began recording beats and raps in a self-constructed basement studio at the age of 14. As he matured, Harrison’s taste broadened and his music began to reflect the distinctive style of the artists who would leave an indelible influence on his life and art; most influential of all was Nine Inch Nails.

Frustrated by the cookie-cutter nature of the popular music industry, Harrison formed Bombs and Bottles in 2009 while enrolled in college at Binghamton University. With Bombs and Bottles, Harrison provides a more sophisticated and complex alternative pop music experience to what has seemingly become an inartistic industry of parody.
Working with friends and fellow musicians, most notably vocalist Arlen Wiener, Harrison began to write, produce, and record tracks for Bombs and Bottles in late 2009. The band’s first singles, Playing Hard and Money, became instant hits on college campuses where they would be played during Harrison’s DJ sets.
Bombs and Bottles 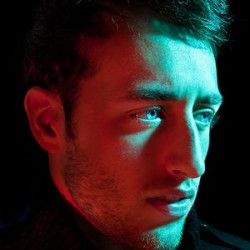