The Curiously Strong Peppermints
Artist info
Awkward Bodies. The name itself feels so instantly relatable, expressing how most of us feel about ourselves. It’s confrontational, yet comforting. The Minneapolis four-piece have been called shoegazers, soul stompers, dream-poppers and heart stoppers. None of these descriptions are wrong, but they don’t fully encapsulate the sound of the group as heard live or on tape.

So what’s so special about Awkward Bodies? Maybe it’s the way the influences and aesthetics the individual members bring to the band assemble to be something wholly different… something the Minneapolis scene has missed for a long time. Maybe it’s in the screeching, almost searing guitar attack that both repels and attracts like a siren (the mythical Greek and speeding ambulance types.) It very well could be the solid groove (assuming groove isn’t a bad word in 2012) of the rhythm section. It could even be the way all of these elements swirl around the burly frontman with a voice that moves effortlessly between sticky sweet and shyly abrasive, often within the same song. The simple answer would be: all of the above. Awkward Bodies pull together the ear-blistering sonics of the loudest whatever-gaze bands without compromising their aggressively honed pop sensibilities. 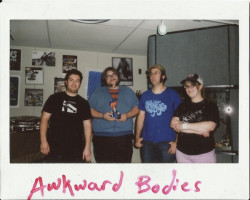