No releases found
Artist info
The Mowgli’s are a Southern Californian band with a Southern Californian soul. The eight-piece started in a garage in the San Fernando Valley where many of them grew up. They’re bound together by an intricate social web that dates back to childhood and their harmonies carry a message of universal love and togetherness. Brother and sisterhood. It’s all about unity, having a good time, and the idea that humanity can achieve a higher level consciousness.

They practice what they preach; everything is collaborative. Their music draws from a desire to grow together and a sense of security within the group. Like siblings, they fight, make up, and in the end, emerge stronger.

Their collective approach might draw comparisons to Arcade Fire or Broken Social Scene, but their sound finds its place somewhere between the folk-tinged rock n’ roll of Edward Sharpe & the Magnetic Zeros and the youthful upbeat pop of Cults, siphoning the energy of pop punk on a caffeine drip. For them, it starts with having a message and trying to say it in the most uplifting way, inspired equally by the magnetism and energy of San Francisco, as they are by the solitude and serenity of the Big Sur coast.

The Mowgli’s have set out to win your heart and save the world with love, laughter, and hand claps.

...8 friends from Los Angeles who are making music with love, and making love with music.
The Mowgli's 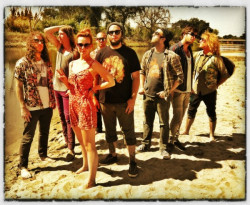