Artist info
Arms of Ra is a post hardcore / sludge band influence by Orchid, Cult of Luna, COMITY, among many others, from around Paris. Formed in 2007 from Mansour, a modern metal band influenced mostly by Lamb of God, the band slowly morfed around Pierre Alain (guitar player and then bass player), and Heddy (also part of different bands : IDEM Crew, Donkey Punch and Kick Their Face), who started as a bass player and then moved to guitar.
Arms Of Ra 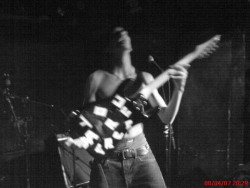