Holmes is a band from Vänersborg, Sweden that plays “Scandinavian americana” according to Rolling Stone. We  like to build up slow paced songs with intricate weaves of melodies using accordion, lap steel and piano. We grew up in the '90s during the years when some of the greatest hip-hop albums ever were made and when there was at least one punk show every week in Vänersborg, a small town by any standard. We also started our ﬁrst bands during that time and did everything from releasing records and printing t-shirts to booking tours and organizing concerts by ourselves. We released several EP's and didn't consider doing it any other way until 2008 when our paths crossed with Black Star Foundation, one of the few surviving Swedish labels from the punk heyday, and realized that we could still do the same thing but together with other people. So we took the best parts of the musical environment we grew up in and combined with spending the following years listening too much to albums by the likes of Red House Painters, The Cure and Tim Buckley that might explain how we ended up with an album like Burning Bridges in 2012.

It could be argued that we've had more in common with a sports team than a band since our start in Vänersborg in 2003. Although the core of Holmes has been the same since the beginning, we’ve had roughly 25 persons going through our rehearsal room in the basement of the old mental hospital at Restad Gård since then. This year we'll go on tour with the same line-up twice in a row for the ﬁrst time. Now no one can tell us that we won't try new things. Last year we accomplished some of our biggest achievements as a band so far and were lucky enough to play both at Orange Blossom Special Festival in Beverungen, Germany and at the Umeå Open festival in northern Sweden, while ﬁnishing up the songs for the new album. Staying true to our sports mentality we've also yet to record twice in a row with the same line-up, this time with rookies on bass and drums. “Play as if you're making a Wu-Tang beat”, that's the one instruction that every Holmes drummer gets and every bass player needs to follow. We've been fortunate to record Burning Bridges at Kepner Treg in Göteborg with producer Per-Ola Eriksson and enjoy his sixth sense of what makes a potentially classic song for a slow dance. He's helped us bring life to both our debut Wolves (2008) and sophomore album Have I
Told You Lately That I Loathe You (2010) and this time he brought Torbjörn Lorén and his good manner of keeping track of even the smallest details along to put something new in the mix (pun intended). Maybe you'll be able to hear our the background we’ve come from when you listen to it and maybe you won't, either way we believe that Burning Bridges is our best album so far. Hope you like it.
Holmes 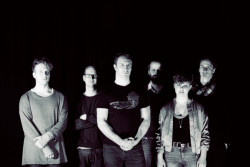