Artist info
Lissi Dancefloor Disaster is a electropop duo from Uppsala, Sweden. They consist of the street artist and music producer Johan Tilli and the singer/songwriter Josefin Lindh. They met at a course at Uppsala University that they later dropped to isolate themselves in a studio.

On their myspace they write in uppercase letters that they are: "A ELECTROPOP BAND", "AN ART COLLECTIVE", "A MOVEMENT", and "THE FUTURE".

Swedish media tend to describe them as a over-medicated the Knife on a video-game event.

Themselves thinks of their music as a way of surviving today’s society, sounding like the perfect match between Le Tigre, Slagsmålsklubben and Chicks on Speed.
Lissi Dancefloor Disaster 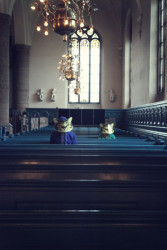